Using innovative technology, the Dollbergen refinery turns that dirty, smelly black stuff from the bottom of your engine into sweet, clean lubricating oil. 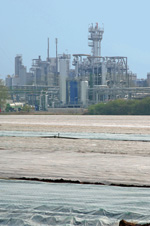 "Used oil doesn’t mean waste”. According to this devise the Mineralöl-Raffinerie Dollbergen GmbH (MRD), located near Hannover in Germany, has been recovering high-quality base oil from used lubricants for more than fifty years. MRD started its business with the manufacture of simple dewatering systems for the production of fuel oils.

The company soon developed expertise for continually improved technologies, enabling it to engage in the production of high-quality base oils used in lubricant production. The successful start-up of the new “Enhanced Selective Refining Plant” in March 2005 was the beginning of a new era of re-refining technology. The base oil produced in this plant surpasses products made from crude oil in purity and quality.

Today, MRD has the capacity to process 230,000 tonnes a year of used oil and oil-containing liquids of which 120,000 tonnes are used as feedstock for the production of some 70,000 tonnes of new base oils. 65–70% of the used oil comes from the domestic market. Half of  the total amount of collected, used oil is supplied by the fellow subsidiary KARO AS Umweltschutz GmbH.

Holger Bretschneider, who was the project manager for the new demonstration plant, explains that the chemical characteristics of the base oil fraction in used lubricants are unchanged. Modern, high-quality lubricants also contain synthetic components. In addition, the lubricants are polluted by sediments (metal particles, smut), water and fuel residues which deteriorate the lubricating qualities. About 70% of the used oil is endlessly recyclable and constitutes the base oil.

The recovery of base oil from used lubricants requires different process stages such as de-sedimentation, dewatering, separation of gas-oil components and separation of the base oil fraction by removal of waste additives.

The main problem are the toxic Polynuclear Aromatics (PNAs), levels of which have increased in waste oil over recent years because of the increased period between oil changes. The former process of clay treating did not remove PNAs from the final distillates. "Besides, the oil still had that used oil odour and a relatively dark colour," says Bretschneider. "The clay only bleached the oil and removed some remaining body colours from the distillate – it was little more than cosmetic."

And it was bothersome. Every year, the refinery had to buy 3,500 tonnes of fresh clay, which, once the oil had been treated, ended up as 4,900 tonnes of waste. Bretschneider remembers: "We had to pay other companies for disposing the used clay, which could be used by them as a low value heating source."

Bretschneider says MRD started to look for new ways to process used oil in the 1980s. Initially they considered the then state-of-the-art hydrogenation – but luckily for them perhaps, organisational uncertainty involving changes in shareholdings meant they couldn’t proceed. In the mid-nineties they returned to the topic and realised that hydrogenation also wouldn’t give them the quality of oil they now needed to meet modern standards. "We used to have to sell our oil at a discount," says Bretschneider.

Extremely severe hydrogenation would get rid of PNAs, but it would have an unwanted side effect: they’d be artificially lowering the quality of their end product. That’s because much of the highest quality modern lubricating oil is synthetic – it’s still made from crude, but it’s processed in such a way that it contains only the desired hydrocarbon chains. This premium oil ends up in the pool of waste oil which arrives at MRD, and it would be a pity to waste it. But the severe hydrogenation needed to get rid of the PNAs would also break up those special hydrocarbon chains.

So the search was on for a technology which would both get rid of PNAs and retain the qualities of  the synthetic oil in the mix. That way MRD could produce oil which was even better than new oil refined from crude. "We decided to look at solvent extraction," says Bretschneider. "We knew it worked in other fields, including the oil industry, and we had to find out if it would work with used oil as the raw material."

MRD’s laboratories came up with a suitable solvent which was already used in the oil industry for the removal of aromatics, but the challenge was to develop an industrial process based on its use. It took several years for the lab to find the right parameters.

But there were further delays, now due to acquisition negotiations between 2001 and 2003. Real project work could only start once the refinery was acquired by Mustad International Group in 2003. Now, since March 2005, the "Enhanced Selective Refining Plant," supported by national and international patents, has been bubbling away on the refinery grounds. "It took us twelve months from the first drawings to operation," boasts Bretschneider. "It’s been going a year, and we’ve already had 8,000 hours of operation from it, with no serious stoppages. That’s pretty good for a new process." While MRD retained technical and commercial management of the project, site management, planning and project execution were provided by Chemieanlagebau Chemnitz (Chemnitz Chemical Plant Construction).

The objective was not only to produce the desired base oil quality but also to do so in the most environmentally-friendly way possible. The project has been financially supported by the EU within the LIFE environment programme, as well as from the German state of Lower Saxony within the R&D programme.

Holger Hindenberg, the project’s engineering manager, explains that the plant is designed to operate as efficiently as possible. "For example," he says, "the process has been designed to allow maximum heat recovery at these process conditions. "

An efficient and space-saving process 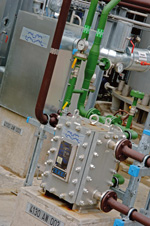 Quality is controlled online throughout the process, and the whole refinery needs between five and seven people to operate it at any one time. What comes out is a bright, clean oil with one of three viscosities, depending on the characteristics of the used oil which goes in. The feedstock can be changed on the fly, and the raffinate from the transition is used for the medium viscosity.

Some of the advantages of this form of oil recycling are obvious. Firstly, the old oil is not used for the low-grade purposes of firing industrial processes, with all the carbon dioxide which that produces. But, in addition, making oil this way has far less environmental impact than making oil from crude, producing a third of the carbon dioxide and a twelfth of the sulphur dioxide.

Finally, the raffinate is mixed with additives to make oils for different applications, including industrial lubricants and oils for gearboxes, motors, hydraulics and metalworking. As well as its own Motor Gold and Pennasol brands, MRD also makes oil which is sold under the names of major oil companies.

So it’s just possible that the oil you buy today may have already been through your engine once already. But don’t worry – it may be even better the second time around.

Latest technology in the new plant

MRD’s new plant boasts 23 Compabloc heat exchangers from Alfa-Laval, and they represent every Compabloc size in the company’s range.

Frank Lehnhoff, Project Manager, Process Industries with Alfa Laval Mid Europe, says, “it’s a very good showcase for what the Alfa Laval Compablocs can do: we have coolers, heaters, heat recovery units, condensers and reboilers. This project was the start of a close partnership with MRD.”

The fact that the Compablocs save considerably on space was an important issue, but MRD also needed heat exchangers which would be suitable for use in the specific circumstances of the new plant. As Holger Hindenberg says, “The solvent attacks gaskets, so we needed a welded unit, but we also had to be able to maintain it easily, since working with different used oil compositions means we have a lot to do with dirt.

”The fully-welded Compablocs fulfil those requirements. The four outside panels can easily be removed so that the units can be cleaned quickly simply with a high-pressure water jet. That was shown when one unit began to chalk up. It was possible to isolate the unit while keeping the rest of the system ticking over, which meant that cleaning was done during a single shift, and the plant was back working without any run-down and start-up losses. The problem has since been solved by running more water through the unit at a lower temperature.

Frank Lehnhoff points out, “It’s very satisfying to be able to supply a plant with all of its heat exchangers. The refinery world has tended to think in terms of shell and tube, so it was good to be able to convince MRD that Compablocs were the right choice”. “Actually, MRD are so satisfied with the performance of the Compablocs that we are now considering to use this heat exchanger type also in other parts of our process”, concludes Holger Hindenberg.